Ubuntu is an operating system which is based on the open-source and free Linux distribution network. Ubuntu releases a new version of their software every six months with long term support (LTS) release every two years and because of its continuous updates, it has become one of the most popular operating systems and might tackle down Windows and macOS in a few next decade. The good thing is, Ubuntu is, it is available in three versions of core, server, and desktop, which is a Debian-based operating system.

Whether you’re on Mac or Windows, a virtual machine is what you’ve probably heard of. There are couple of virtual machine apps. Out of those, there are two ✌ most working and powerful one. One of them is VMware, which has two kinds, probably a free and a paid one. The paid one which is VMware Workstation is definitely for business and more powerful use and the free one which VMware Player is definitely for personal use that will also work professionally. So there’s no difference in their work.

Virtualbox is a free open-source hosted hypervisor for x89 virtualization, which is developed by oracle corporation. As it’s one of top virtual machine app that will allow you to run multiple operating systems simultaneously or in other words, it allows you to run one operating system inside of another operating system. While it requires at least 4GBs of memory and more than 50GB space, but the more the better it will perform. Like with the 4GB’s of memory and 50GBs of storage, you can run a virtual machine which will work fine but for better performance and better results, having more resources will work better than usual.

To install Ubuntu on VMware VirtualBox on Windows, you’ll need to download Ubuntu ISO. Downloading it is pretty easy and it isn’t large too. The Ubuntu 19 is supported for maximum of 9 months while the Ubuntu 18.04 is supported until April 2023 but it’s only available for download in 64-bit.

Whether you’re installing on Mac or Windows, the installation process is nearly the same except a few minor changes and interface. Wherever you’re, installing Ubuntu works from this method. In other words, you can use these steps to install Ubuntu on Mac, install Ubuntu on Windows. The similarity is, they’ll be done on VMware or VirtualBox that there’s no difference in the app.

Fire up VMware or VirtualBox setup and proceed with the installation. 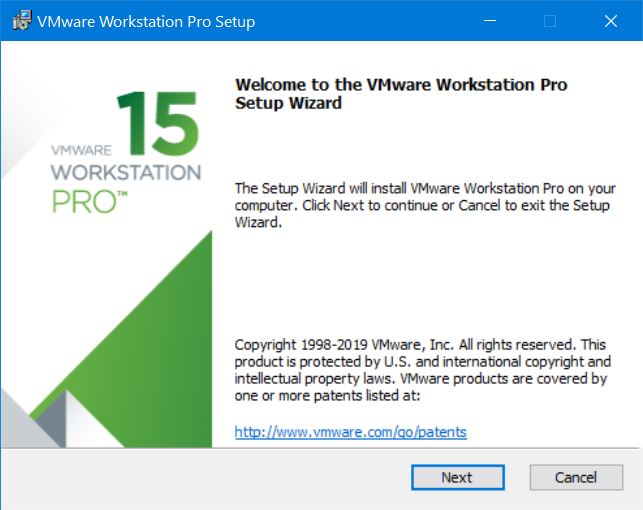 Once it’s finished, let it open. 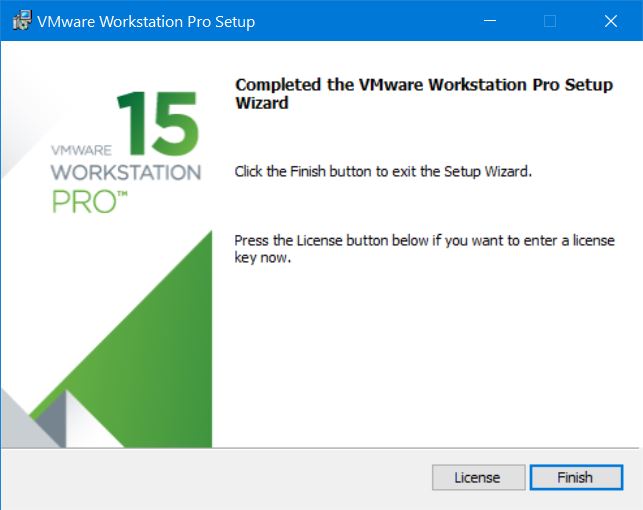 Once it’s done, open the VMware or VirtualBox and let it work.

So when it’s there, press Ctrl + N to open the new virtual machine wizard. This key works on both VMware & VirtualBox.

On VirtualBox, write down the name of the virtual machine which is Ubuntu and without making changes to its location and OS type and version, assign 50 – 60% of the system’s memory and then select Create a virtual hard disk file now and click on Create. 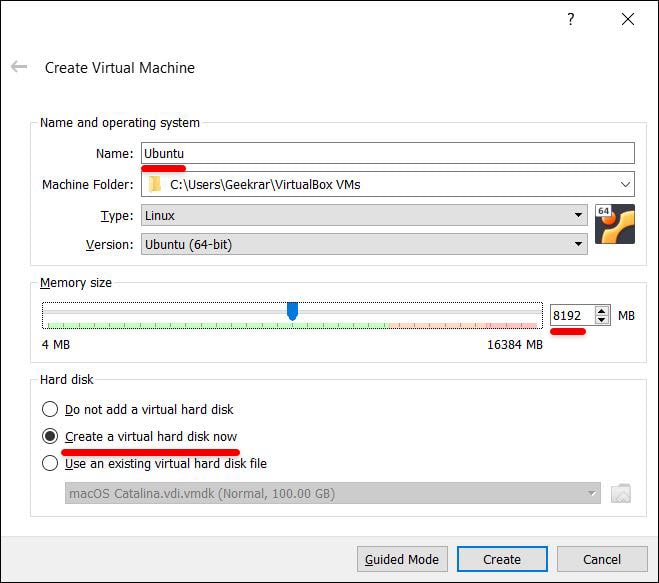 On this window, enter 20GB of file size or more and click Create. 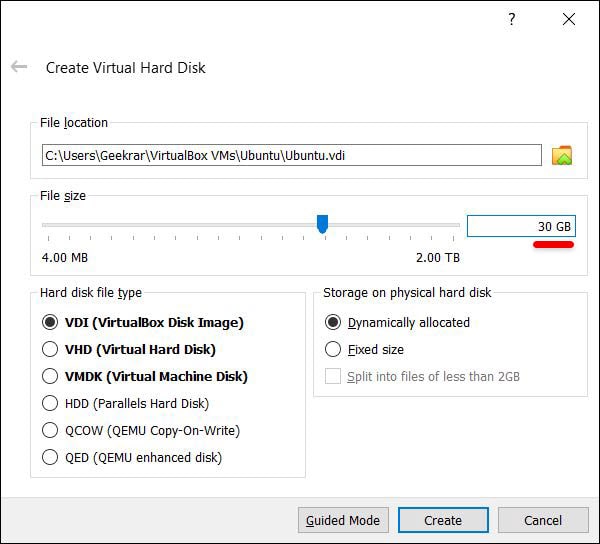 The virtual machine should be created on VirtualBox now. 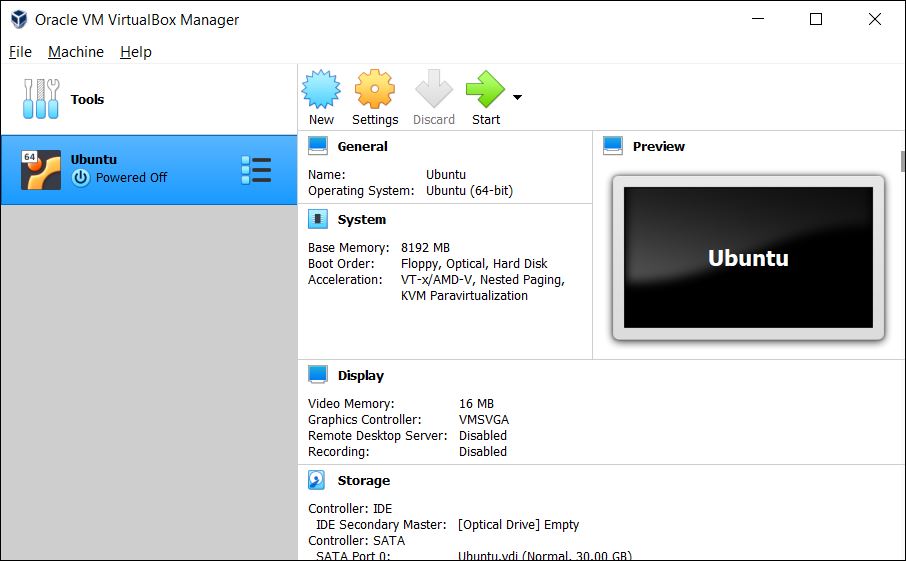 When the new virtual machine wizard is there, simply press Next. 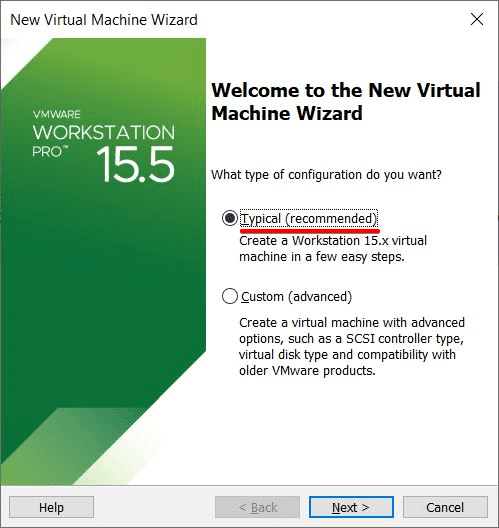 On VMware, select Installer Disc Image file and browse the Ubuntu ISO then hit Next. 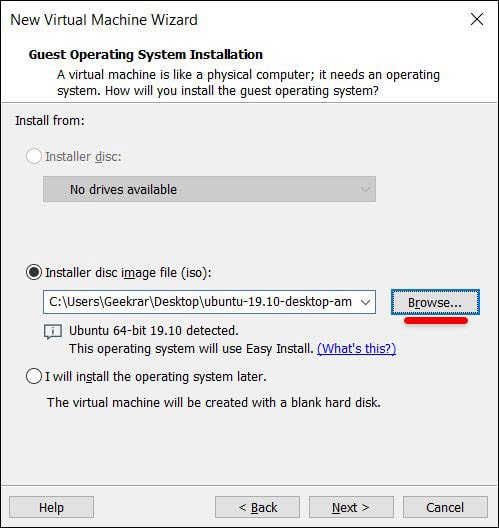 Now put a name, username and a password for the machine, then hit Next. 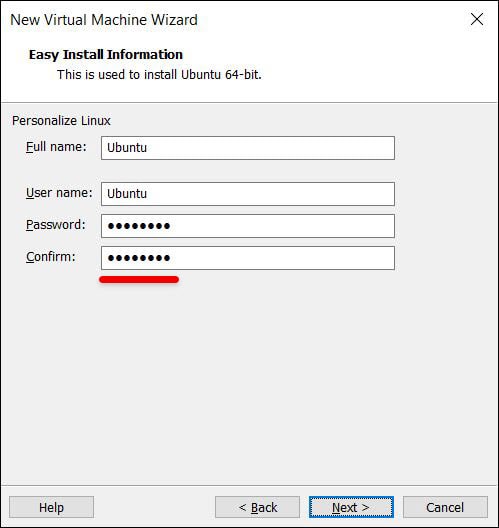 Next up, specify a name and where the machine files should be stored and click Next. 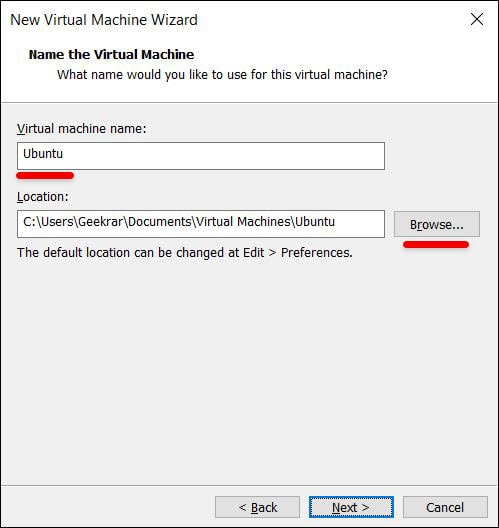 Then specify a hard disk space of at least 20GBs or more and hit Next. 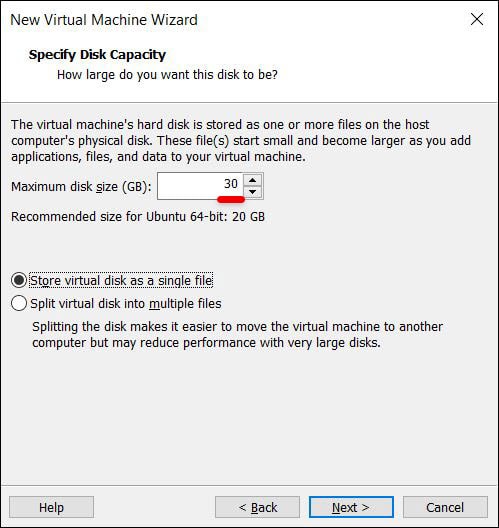 At the end, uncheck the “Power on this virtual machine after creation” and click on Finish. 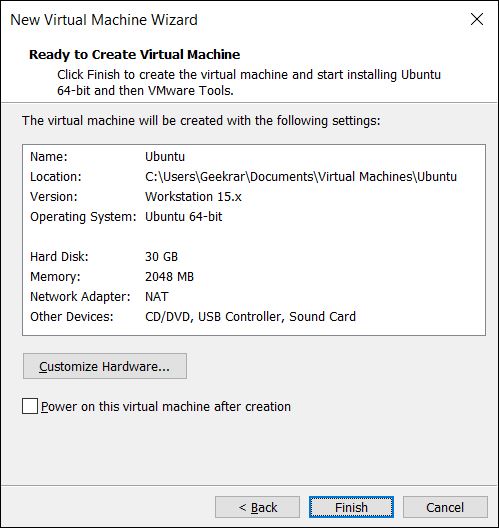 In order to install Ubuntu, we need to set up machine settings.

The machine is now created, so click on Edit Virtual Machine Settings. 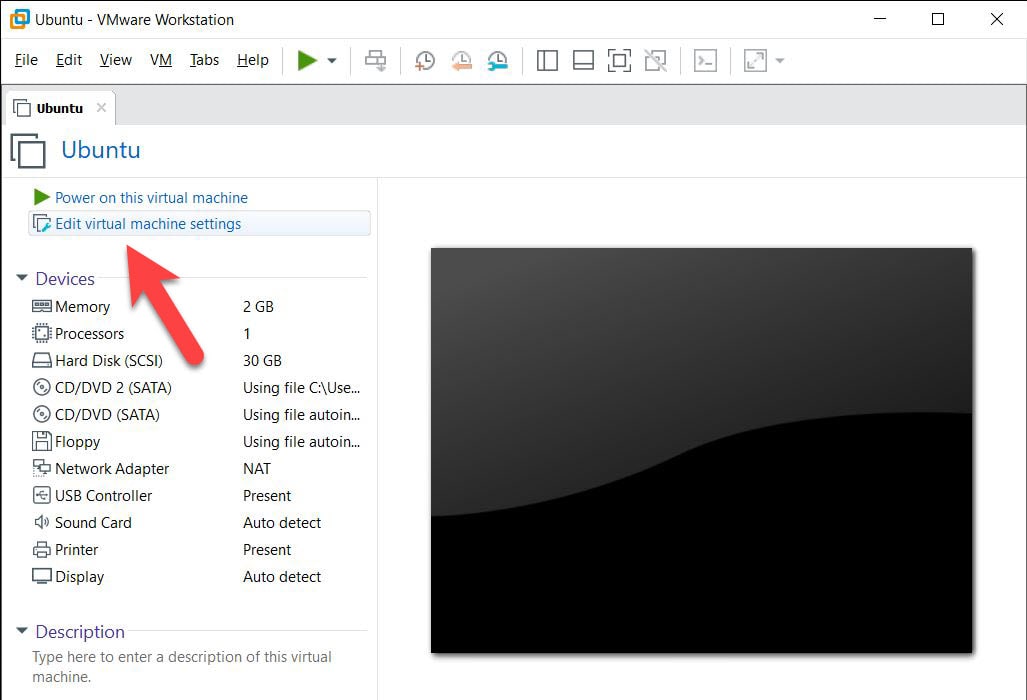 Then specify 50-60% of your system’s memory and also processor then hit OK. 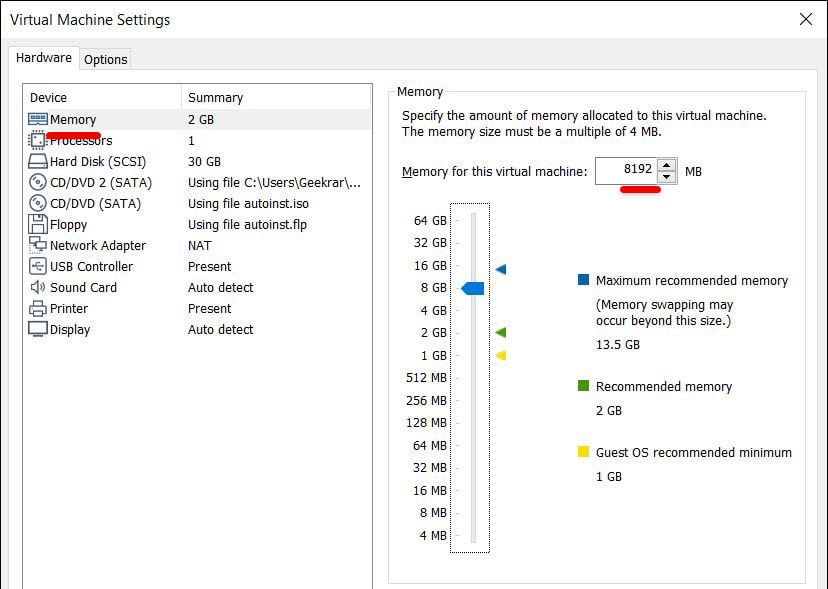 For the processor, increase the amount of the processor from one to two or more then hit OK on the settings window. 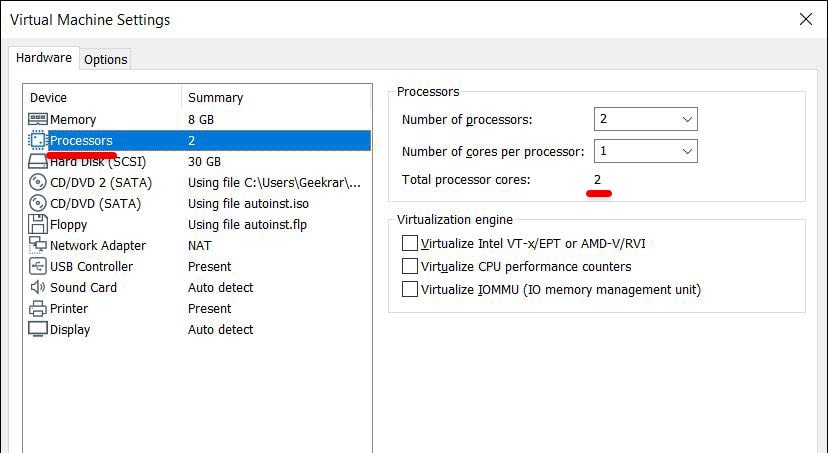 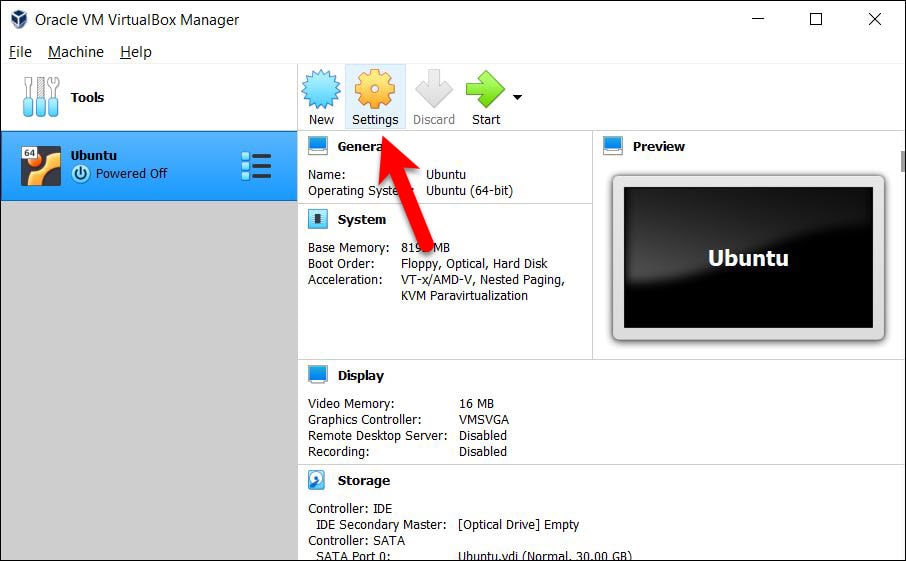 Then select the Display tab, and increase the video memory size to the maximum and also enable 3d Acceleration. 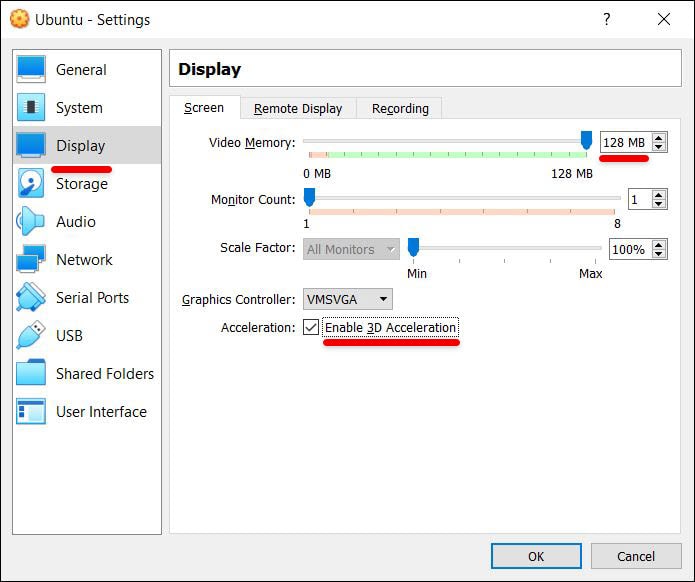 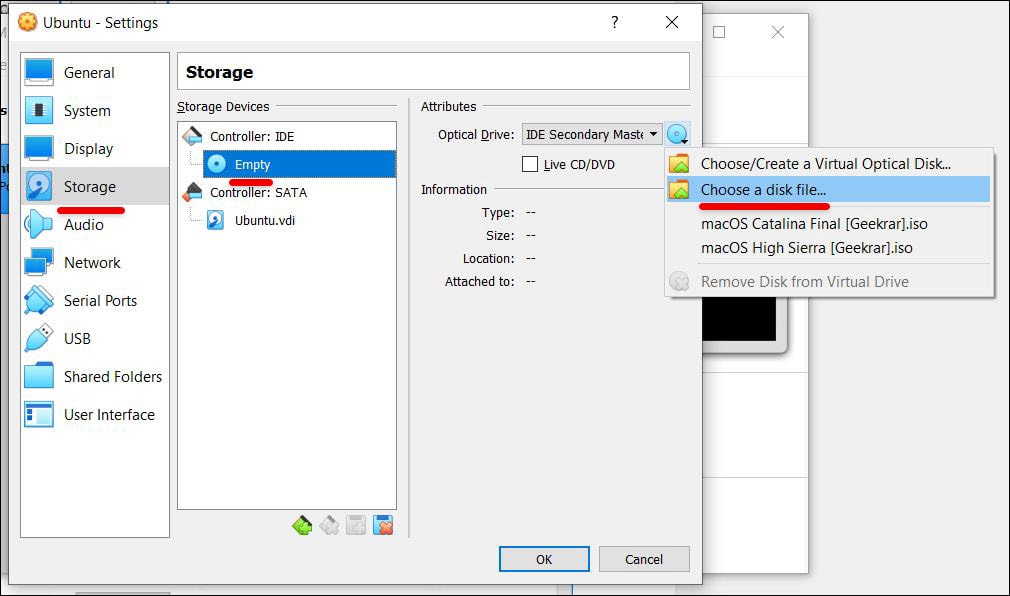 In this screen, browse the Ubuntu ISO image and click on Open. 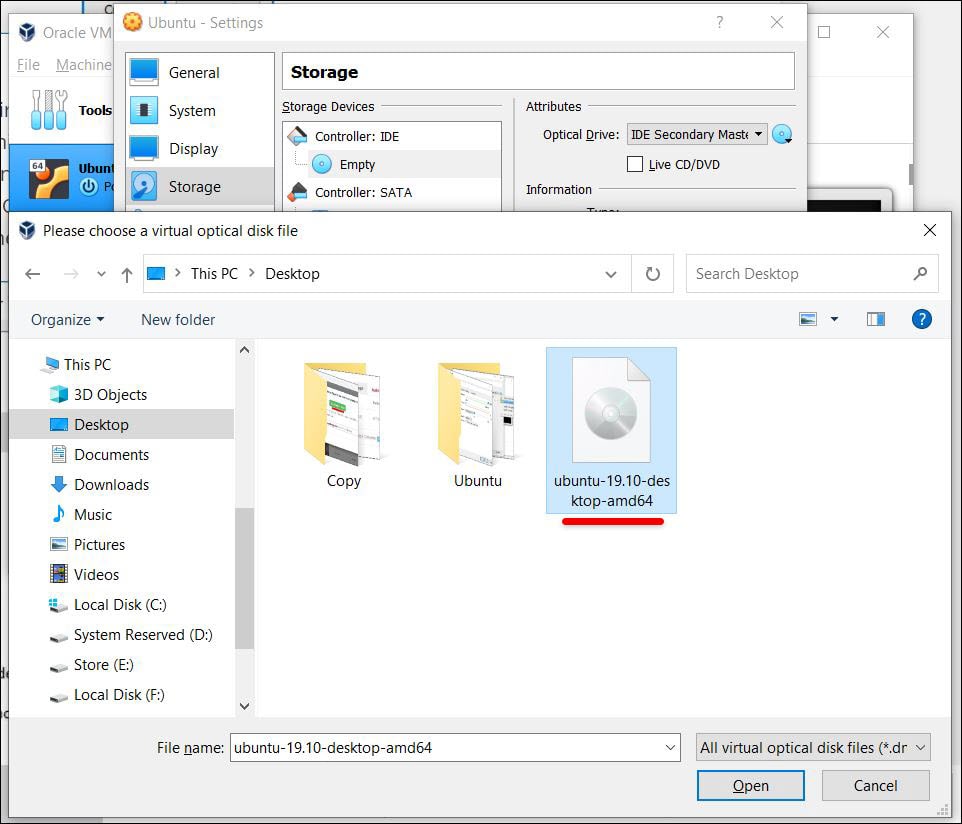 When the ISO file is selected, click on OK. 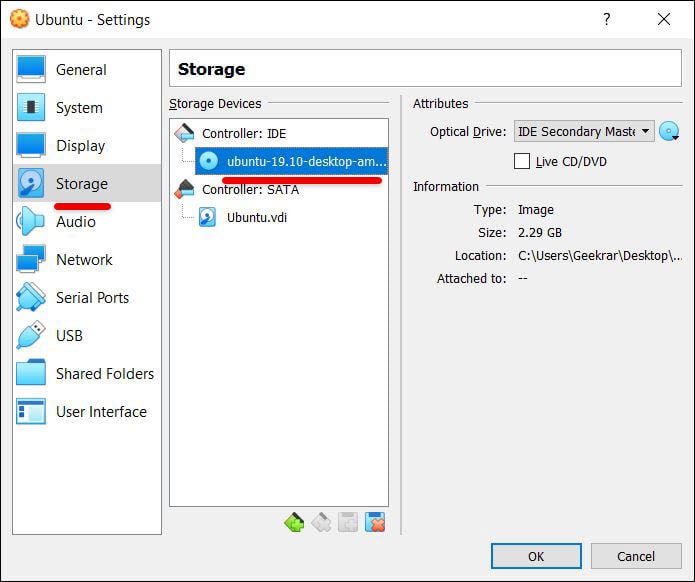 Once the machine is completely set up, we can now Install Ubuntu on VMware VirtualBox on Windows pretty easily.

From the window, click on Power on This Virtual Machine on VMware & VirtualBox. 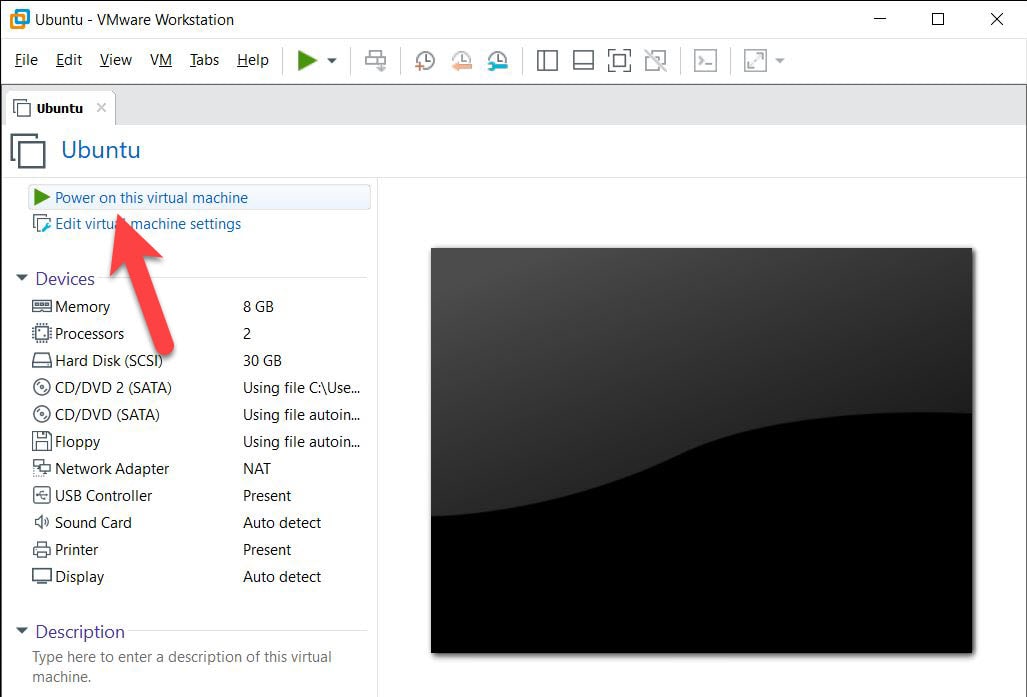 Power on This Machine

The machine will start the installation soon, so wait for it until it’s complete.

Note: We’re installing Ubuntu 19.10, and when a newer version is released, you can probably install it with this tutorial, there will be no huge changes in it. 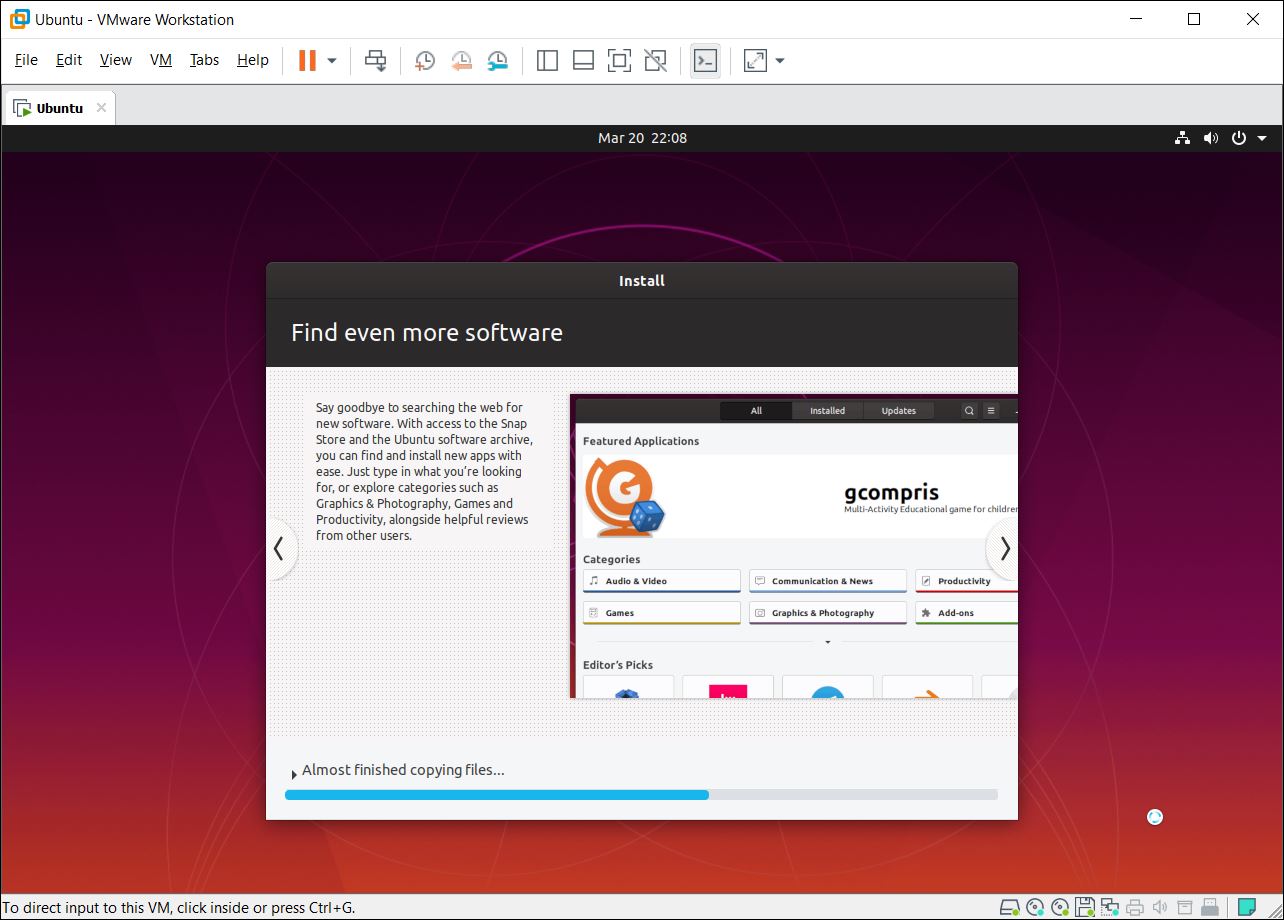 Once it’s installed, it will appear this window. 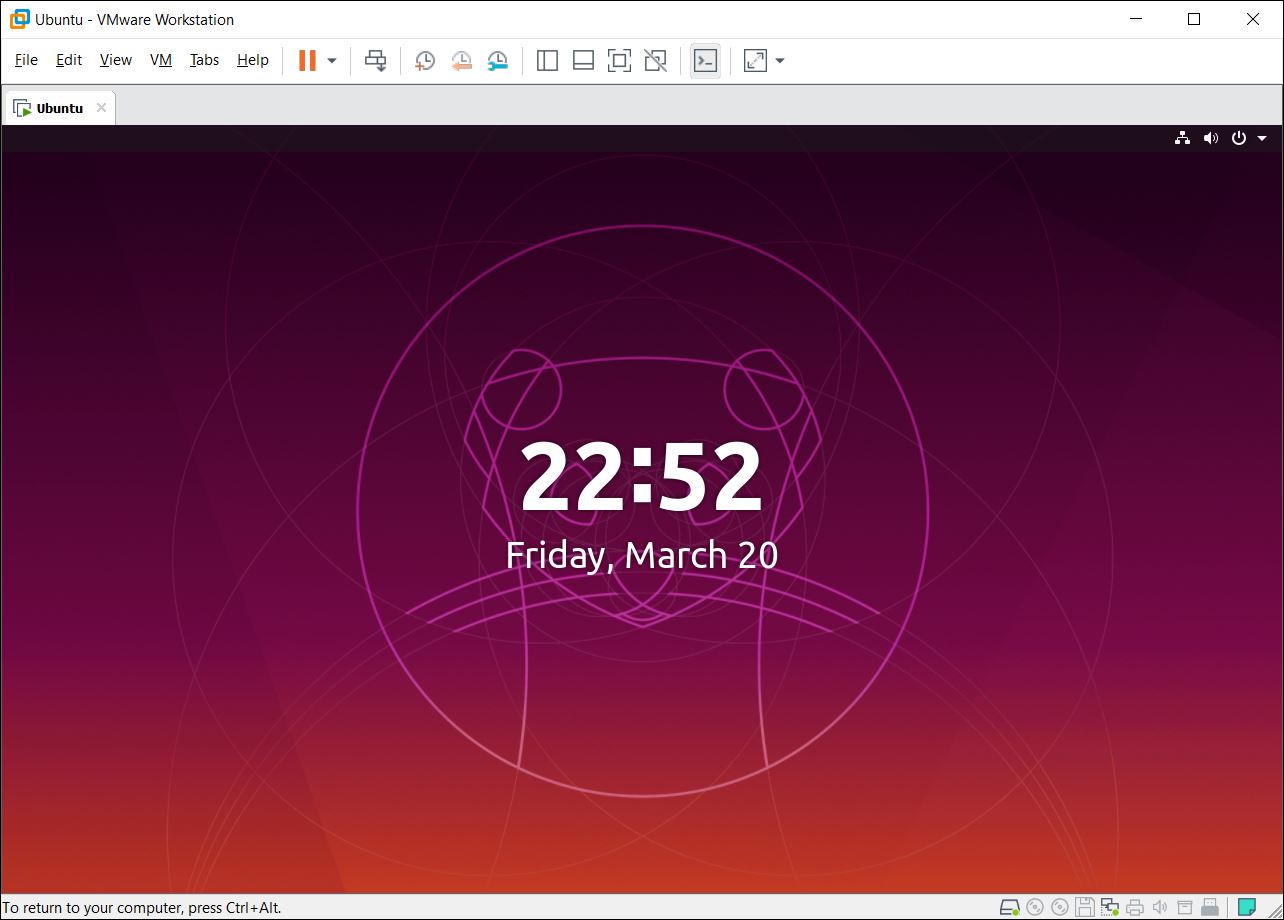 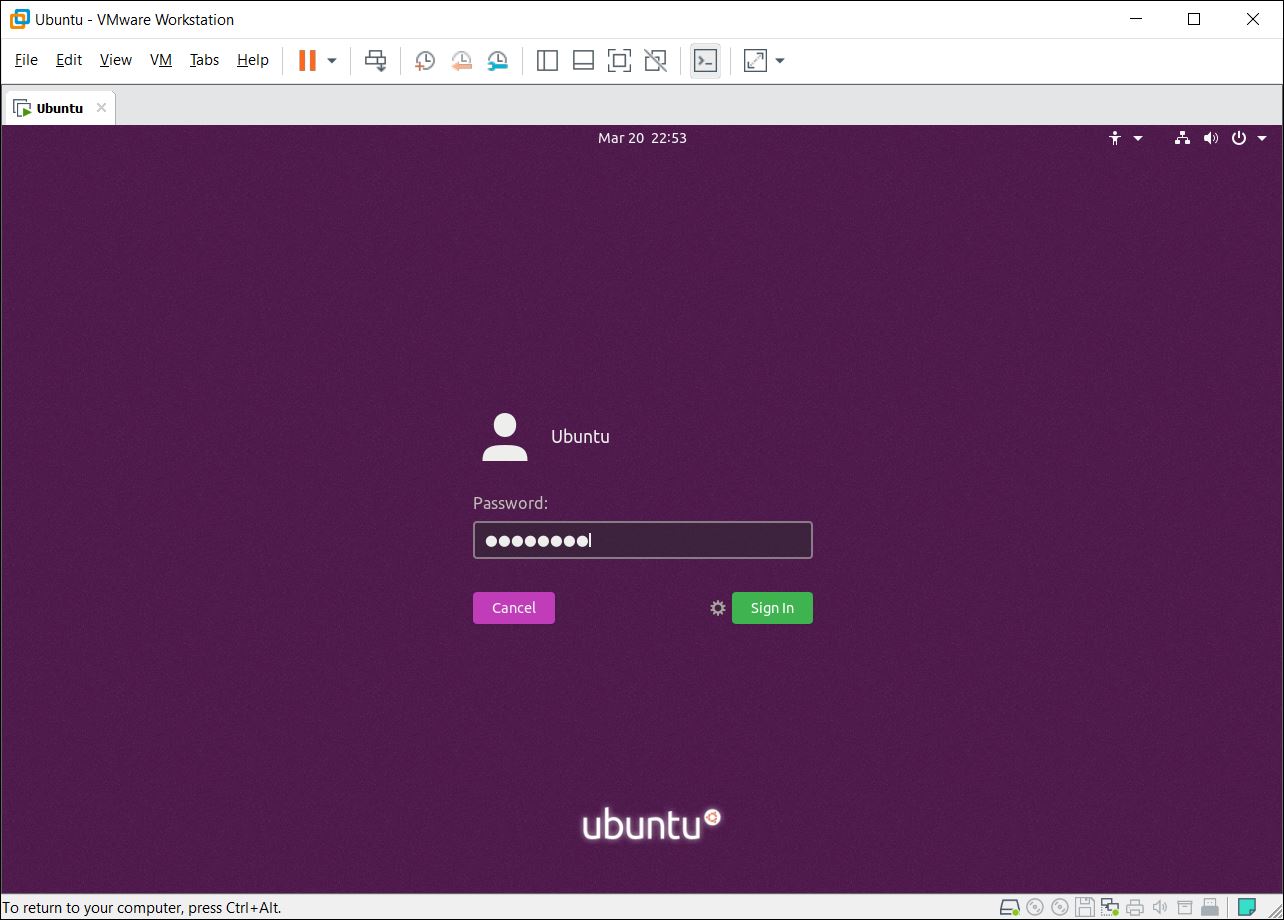 After a few startup screen, the desktop of the Ubuntu will appear, so there you go! 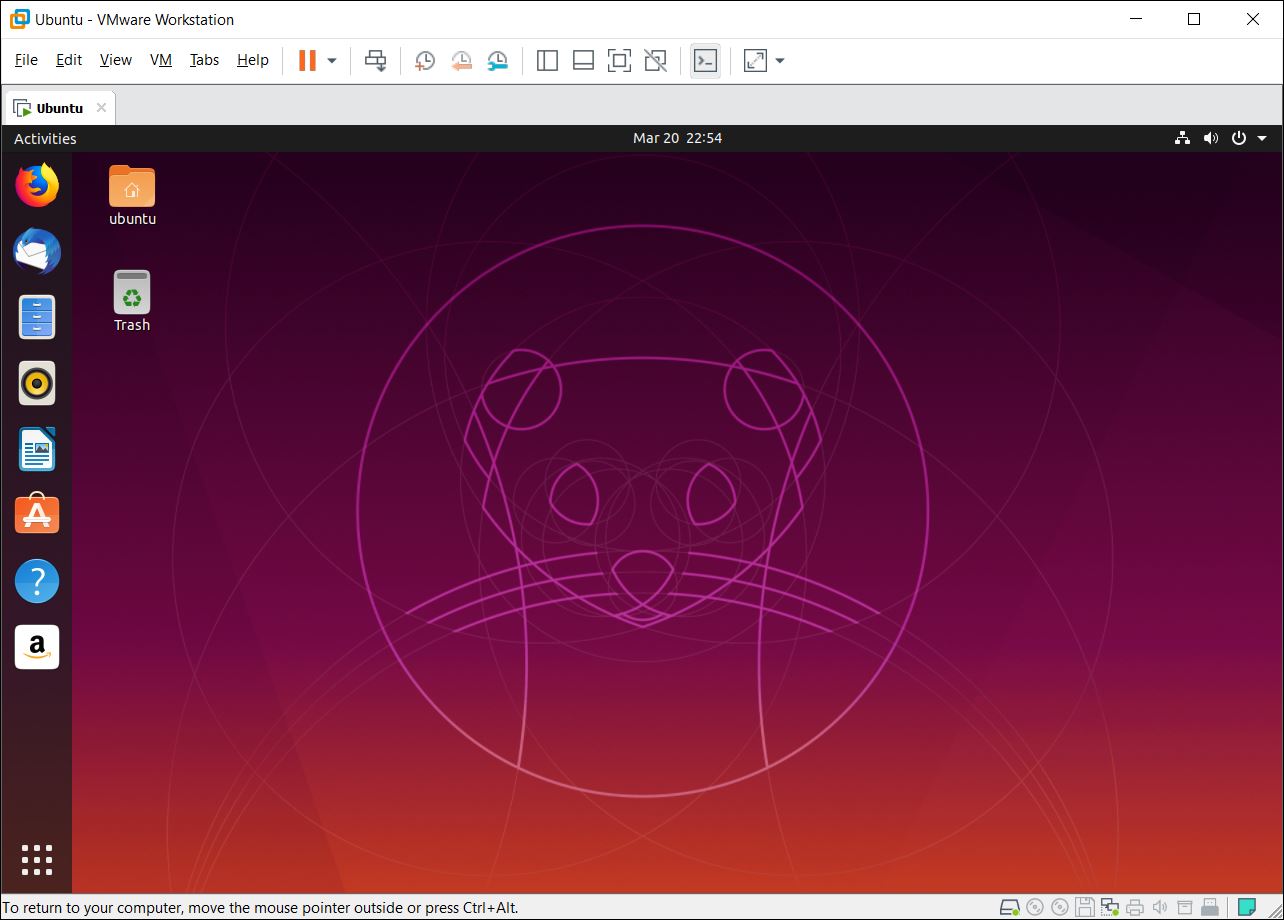 The Ubuntu has now installed and that’s there anytime, anywhere. It works super smooth and superfine. The best thing is, it has installed VMware Tools already so there’s no more steps to take. However, on VirtualBox, you can install VirtualBox Guest Tool from the steps below.

From here, you can try surfing, browsing and whatever you’ve in mind.

That’s it about Install Ubuntu on VMware VirtualBox on Windows . If there’s something remaining or would like to add or make some nice suggestions, we’re happy to hear.