Install Final Cut Pro on Windows 10. In this post, we’ll entirely show how to install Final Cut Pro on Windows 10. Just like Windows 10 which is one of the most used operating systems and people still love, they’d probably like to hands on something new and particularly install macOS Catalina on VMware or install macOS Catalina on VirtualBox on their Windows PC. That’s a whole beautiful opportunity to do. In addition to it, when you’ve installed macOS Mojave or other versions of macOS on Windows, it’s also possible to install Mac apps and work with them.

One of the most highlighted examples is XCode. Most Windows users and iOS developers or Mac apps developers don’t have access to macOS and Mac but uses Windows on PC. For most, it looks like they couldn’t believe how a Mac app can run on Windows but that’s isn’t what the assume. Instead, users could download and install XCode on macOS Catalina on Windows PC. The way it works is pretty simple, first, we download and install macOS Catalina or other versions on VMware or install macOS Catalina on VirtualBox. Then install Final Cut Pro on VMware on there. For this process, we’ve provided you with all the details in these two articles;

For those who aren’t familiar with, Final Cut Pro 10.14.8 which was out in December 2019 has quite useful features. Here are a few of them.

Improves stability while skimming media in the Browser.

These are some of the most important and highlighted features of Final Cut Pro latest version. However, there are lots of features which it has already in it and also new features which we can’t explain one by one.

Once that is done, it’s now pretty easy to install Final Cut Pro on Windows 10.

Now open up VMware or VirtualBox and switch on macOS.

When it’s up, sign in there and open App Store.

Search for Final Cut Pro and click on Get.

Purchase it with our Apple ID and it will definitely install.

Wasn’t that easy? That’s how easy it was. So everyone could do it even a beginner or anyone else.

Even if they could, they’d probably don’t want to purchase two machines for a simple app. In this case, virtual machines are the best option. Anyone even those who only want to try could install macOS Mojave on VMware or VirtualBox and install Final Cut Pro or any other Mac app and hands-on it. Just like we installed XCode on Windows, it is also done similar to it. How was it. Let us know in the comments down below. 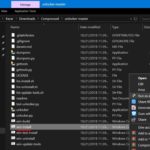 How to Install macOS Unlocker for VMware Patch Tool

How to Create Bootable USB for Kali Linux on Windows

How to Install macOS Catalina on VMware on AMD Systems