Home
Android
How to Download Paid Apps For Free on Android

With the Android devices getting more updates, Android is getting more and more users 👥 every single day. While users are there, they will probably use apps which includes free and paid apps. But just like Mac which is super expensive, users could install macOS the latest version of macOS, macOS Catalina on VMware or macOS Catalina on VirtualBox on Windows PC. While not everyone could afford paid apps like Apple products such as Mac, there are a few workarounds that will bypass paid apps for free.

While paid apps are increasing and even free apps are turning into paid apps, it’s likely that most Android users that picked Android phones for cheaper wouldn’t want to pay for every single app they like. For this purpose, there are lots of apps and websites that promise paid apps for free on Android aren’t trusted and some might break your phone. They could break, unstable, or do some sort of thing that would need your phone to be reset or might even down your phone for a lifetime.

In this case, I take a look and review lots of those potentially assuming paid apps for free without rooting. Some are there that might work but needs rooting that isn’t well, not to talk in-depth, at least for its requiring quite a bit of time, and steps to take. In this tutorial, I’ve break down and picked up two of the top working ways that would definitely provide paid apps for free.

Since the Google Play Store is the app store where users pick up apps whether free or paid. But not everyone could afford or even if they could, they wouldn’t want to buy apps. The idea comes in for looking paid apps for free.

There are tens of thousands of apps and website out there which offer paid apps for free. Out of those, I’ve searched out, collected and picked those that actually work out and will definitely make you glad. So without taking much time, let’s get into it.

From the list, the first one which breaks paid apps into free we’ve added into the top list is Aptoide. Similar to the Google Play Store, its a kind of alternative to the Google Play Store and more importantly, it’s the foremost app market that turns paid apps for free. Including apps that are discontinued and not available on the App Store. For this purpose, there’s no complex instructions or requirement. All you’ve to do is install Aptoide which is entirely safe, secure and definitely free. Since it’s similar to Google Play Store, it does all the things which does Google Play Store that includes checking aall the things that whether its secure or not, this includes all the apps, paid apps that are listed for free and free apps.

For this example, I’ll take Nova Launcher Prime which is around $4 bucks on Google Play Store.

Once it’s done, open it.

When its done, hit back and on this screen, click on Install.

Once its there, skip with it. 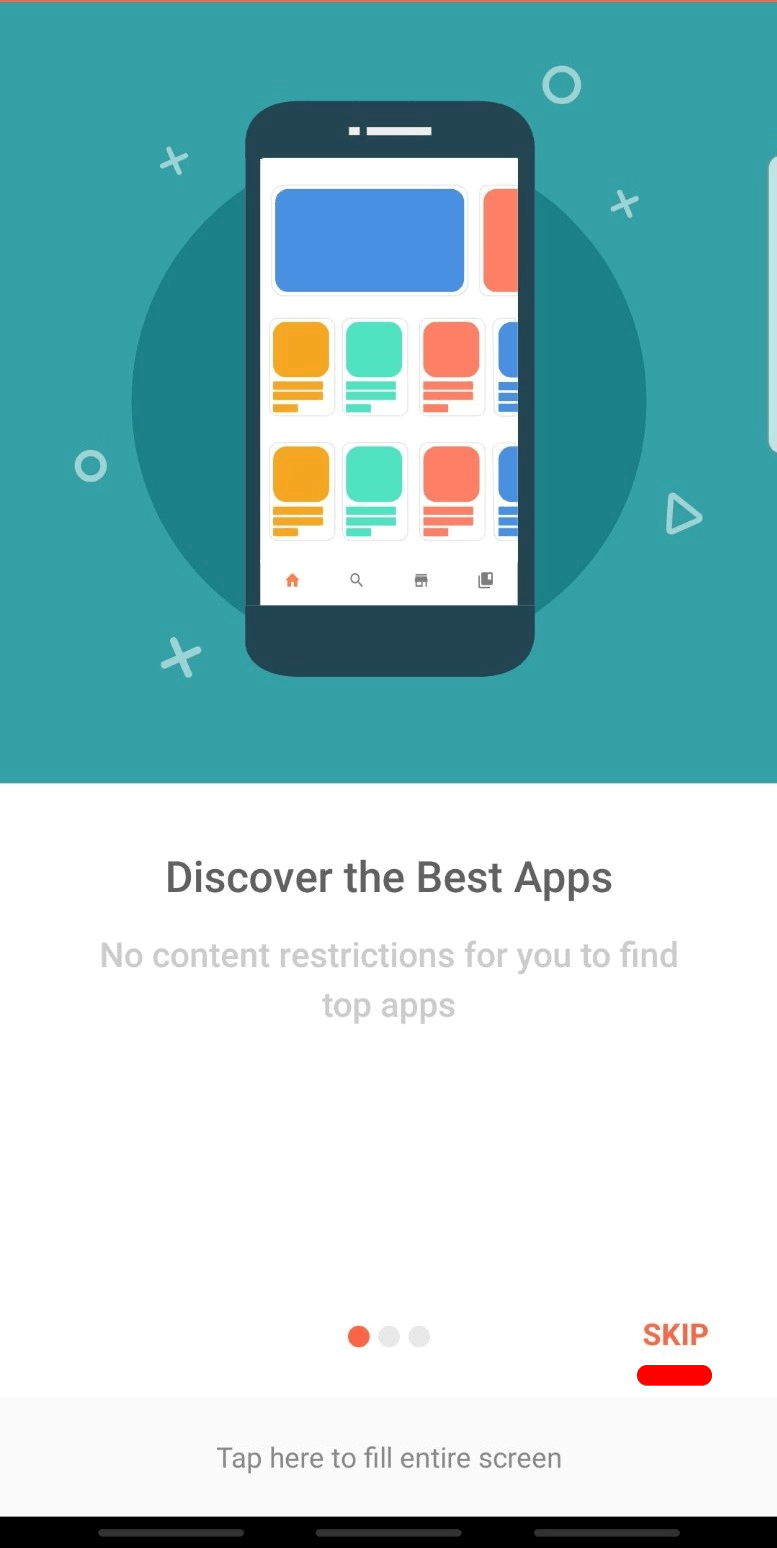 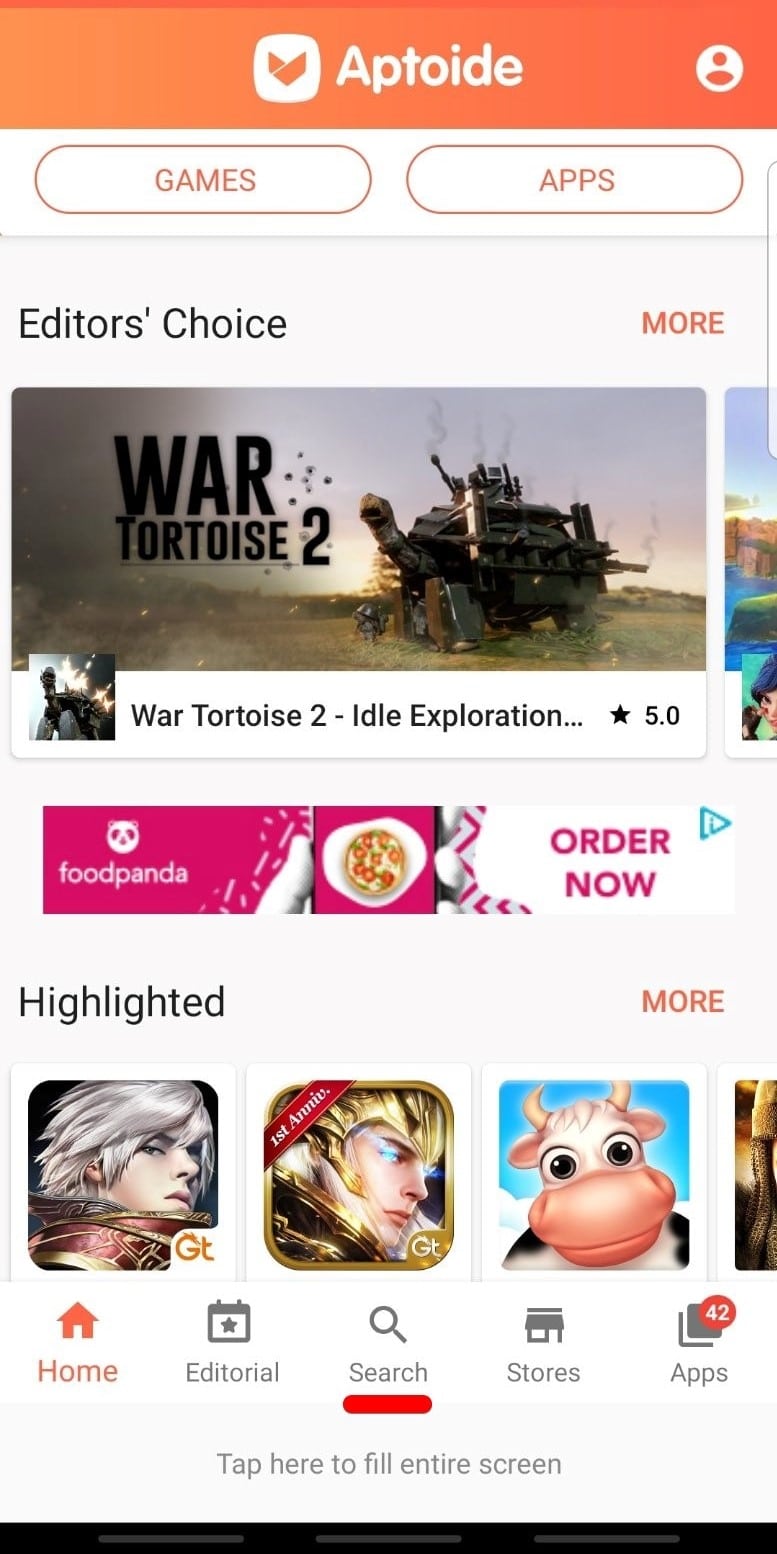 Now type in the name of the app you would like to install and hit the search icon on the keyboard. Like I’ve searched for nova launcher which is for $4.99 so I will click on nova launcher prime. 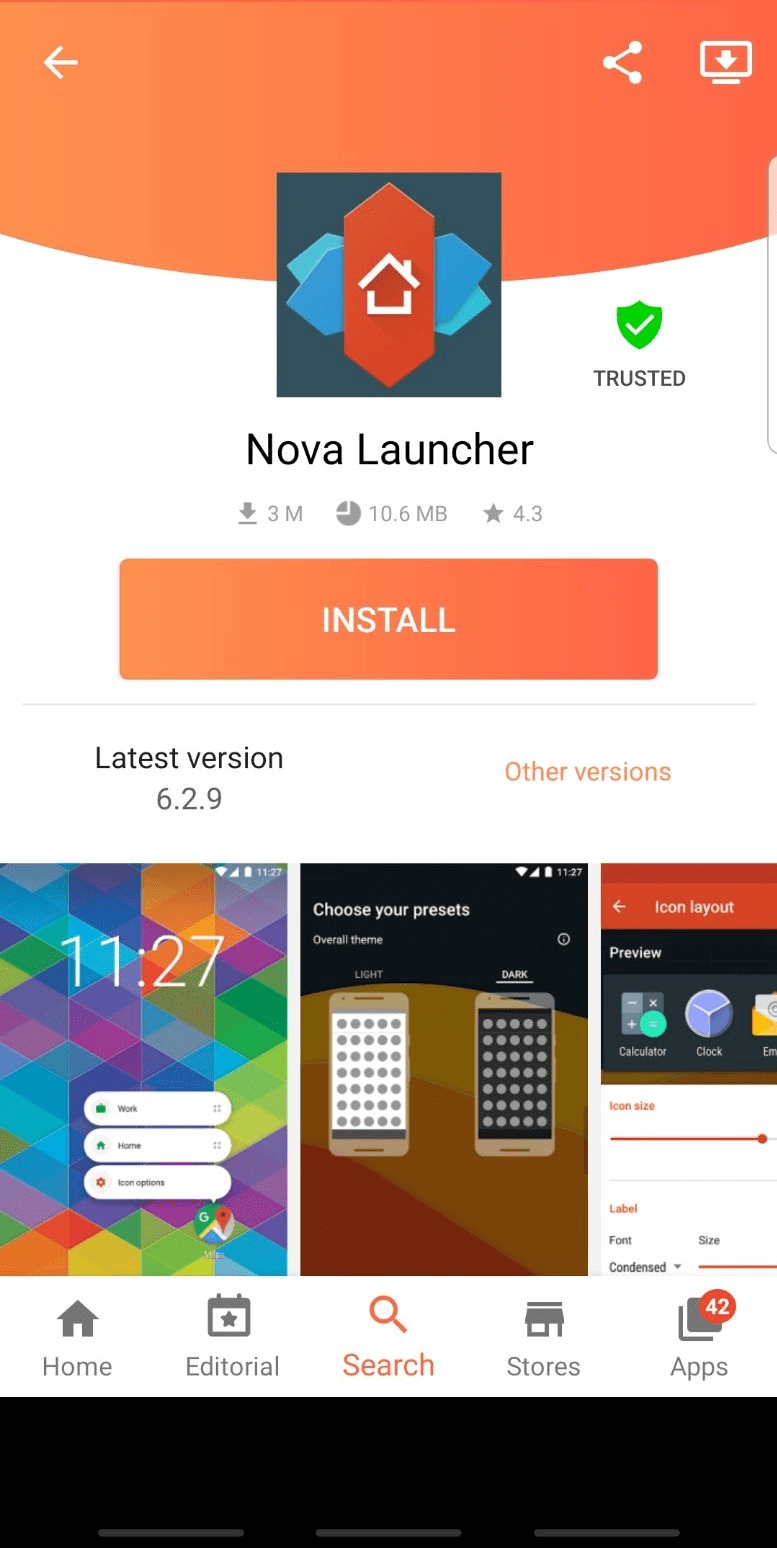 Then tap ok then click on Allow when it asked for permission. 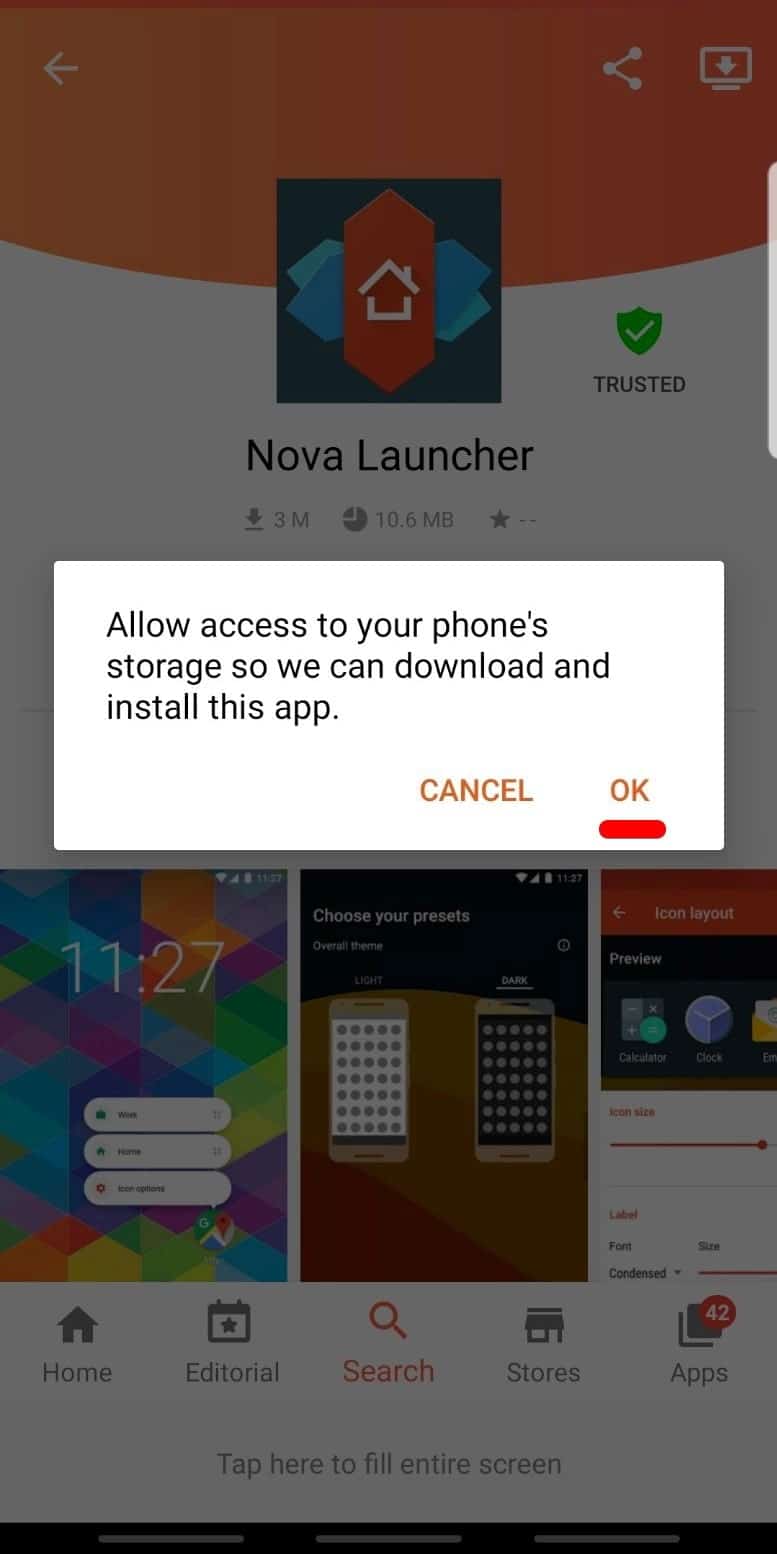 After its done, you’ll be redirected to this screen, so click on Settings.

So hit Allow from this source and hit back.

Then on this screen, hit the preferred app on Install.

Next, choose a theme.

So open up the Nova Launcher now.

And that’s it!  The Nova Launcher is there and you can definitely use it.

Just like these, you can search and install any paid app that can be really awsome so better save some bucks.

Now the second most working way, I’d prefer is Google for the specific app, like if you’d like the Bouncer app which costs around $2. This great app requires a single payment of purchasing it but seems like its a little easy to bypass for those who are interested in it. This strong method works great because most times it will end up with the specific app with the latest version of it. On the other hand, it requires to be careful since some sites can harm or can be malicious. Although there is no such a sign that should show the malicious but there are however some steps that you could take to be careful of. So better be careful.

This method doesn’t require any method to download first or do some sort of other installation. Instead, we’ll head to the app stratightly from Google which is pretty easy to do so. This will be done like, searching the app ending with apk. Like we’ll do for pocket casts such as Pocket Casts Apk. So like these, we’ll do this thing. So here’s how to do it.

For this example, I’d like to take Bouncer which is normally around $2.00 bucks on Google Play Store.

So go ahead and open Chrome.

Next, then enter the name of the app like I’ll type Bouncer.

Now scroll the point where it is the Download button then hit on it.

It will open up in the installation, so click on Install.

And that’s there. The Bouncer app is there so proceed with and that’s it. 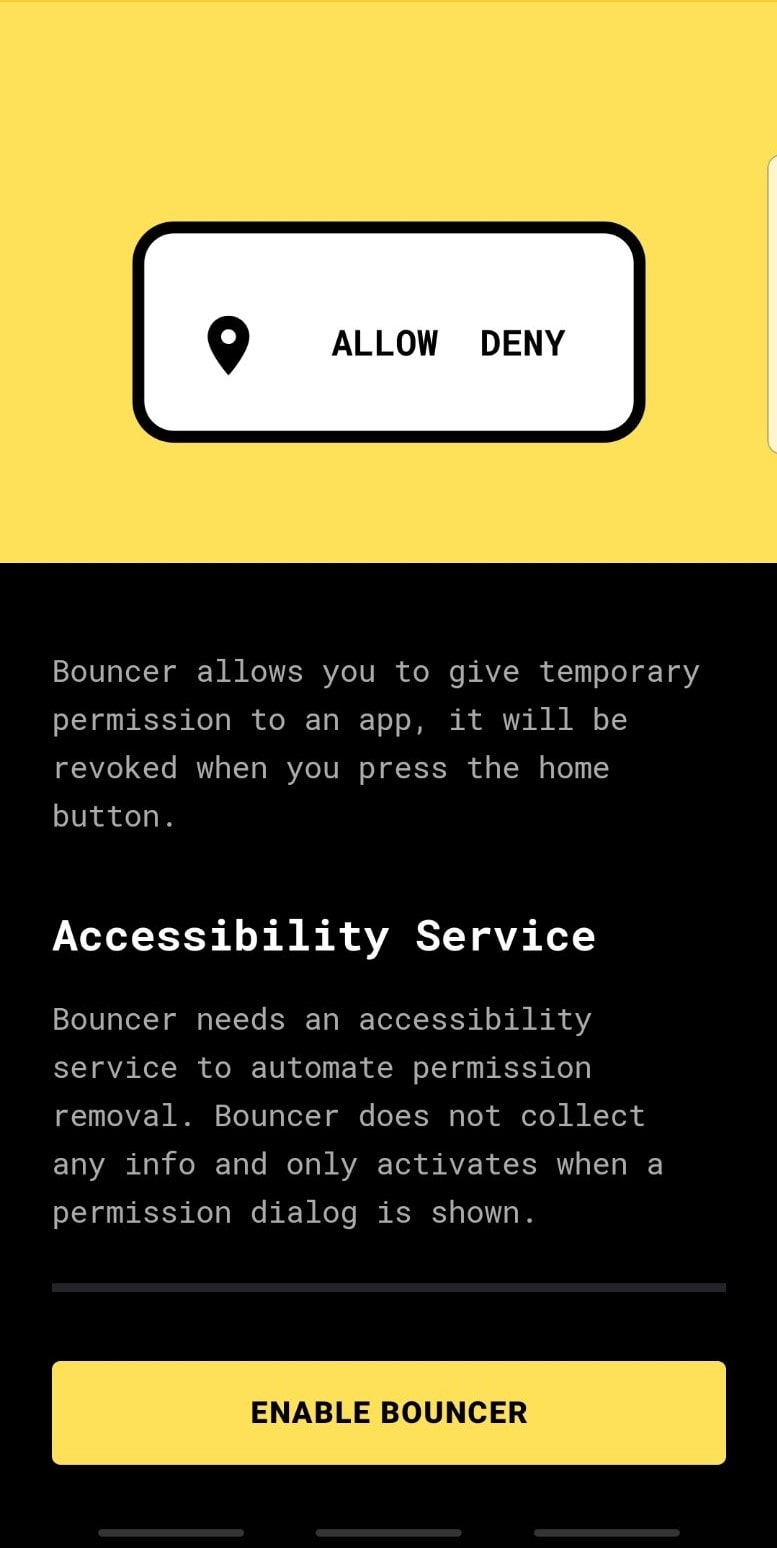 Other than this, there are lots of markets which offers paid apps for free that might work but some may also mess up your phone. Because some of them are malicious or having some other problem. But taking care of everything and being cautious will do end up without problem. From all of these, first, I’d recommend trying the Aptoide which is super cool and have the latest version of the apps. But if the particular app isn’t there or some other problem, so in this case, you can probably try out the second method and then these markets out there.

These stores offer paid apps for free but since they mightn’t be verified or secured completely, you’ll need to take care and be careful about it.

That’s pretty it all to there it is. If you’ve some questions, suggestions or ideas, we’re happy to hear it.