There are always times when you have wanted to get you more out of every time you use your operating system. That can be like trying and messing around with other operating systems. Not only that but also checking out apps and features that are not available on your OS. Also, experimenting, or maybe installing a program other than your OS (Not to take the risk). But in a safe environment just as your Windows. Like these, there are a couple of reasons why you wouldn’t do things on your own computer including testing out apps you’ve developed of your own. Here is Download VMware Workstation Pro & Player for Windows.

With that, buying another computer isn’t always the right solution that could make it worth purchasing. Especially if you are an IT involved user or manager who needs thousands or at least tens of computers with operating system installed. And you would probably want it in a safe sandboxed isolated environment that doesn’t even couldn’t touch your ordinary operating system. This would be incredibly pricey if you do buy for this, which is out of our negotiation. If you are thinking of dual-booting that would get the job done then it turns out not to be that. Continue reading…

The dual-booting is the worst case but also old enough which we all have knowledge about or practically done it. Typically, while you may have done dual-booting or some sort of that, but you know that it doesn’t do what we had expected. Therefore, there’s always a room for better than that which could not only do the thing but also have at least some of the things we think of. And that is near to the idea which is entirely developed for. Here is Download VMware Workstation Pro & Player for Windows.

Just as I said, this is really different and unique from the past what you have accomplished before. In this case, if you are a geeky guy who wants all these, you are going all the way straight to the point. After all, thanks to handful third-party virtualization tool created by VMware Inc (which offers countless handy tools and services (free and paid). Here’s what you need to know about. 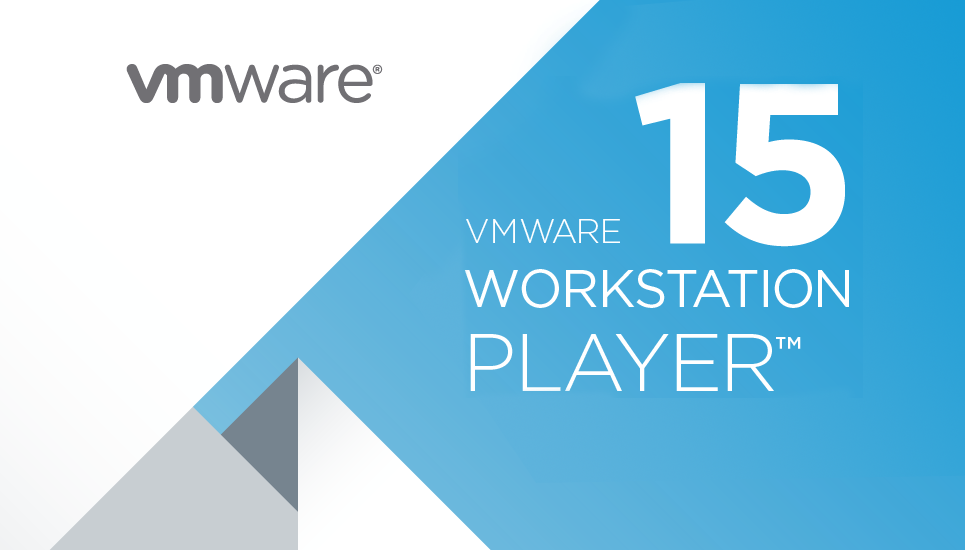 What is VMware Workstation?

In simple terms, VMware Workstation is a great virtualization app which allows you to run an entire virtual operating system computer within your existing system. There, you can run different operating systems you want even macOS but in a more complex way and about many more OS. This all will take place in a sandboxed safe and secure environment that won’t even do anything to your computer excluding using hardware and storage.

While doing this, you will be running and working simultaneously at the same time working with your existing operating system. All this will do is, it takes a specified amount of your system’s resources you have set-up for creating and running a virtual machine. This will be entirely apart and separately happen from your current operating system computer.

Knowing this, you will be able to run apps and operating systems whether that’s Windows, Linux, macOS or another at the same time when doing your thing. So, you can test, experiment, work and do all that you have planned for without needing to reboot every time you switch to. The limit to how many VMs you can run at a time is limited to your amount of hardware you have on your computer.

Regarding the hardware resources the VM will reserve, you will be able to customly assign the amount of hardware you want. At the end, before finishing the configuration, you will be asked whether you want to customize things you have set up including hardware you have assigned. Once the virtual machine is created and the operating system is installed, you are free to penetrate, test your app, do your thing and even share files with your existing OS. Also, you will be able to drag and drop files from the virtual machine to the working OS or vice versa. In the end, you can also use the handy tool to preserve the state of the virtual machine that you can roll back to the time you had taken it. Here is Download VMware Workstation Pro & Player for Windows

In the VM world, the operating system running on your computer is called the host and any operating systems running inside VMs are called guests. Now in this point, a VM is stored on the host in a drive and will take place according to the configuration that is stored in a single file or in multiple files. here in this case, you can fly and take your virtual machines with you by just copying them into a portable drive. 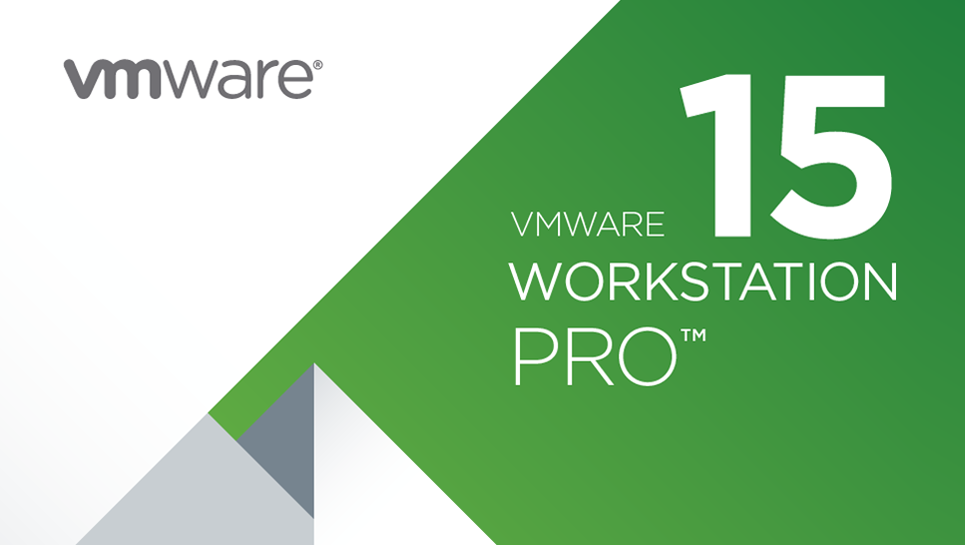 As a result, VMware Workstation is a perfect and reliable option when it comes to virtual machines. Which provides a high performance, strong reliability, and cutting edge features in a seamless way regardless of where they are running. That functions and work entirely separate and apart from your existing operating system. The Workstation’s web interface lets you access local and server hosted virtual machines from your PC, smartphone, tablet or any device with a modern browser.

In general, you can count and have everything on the virtual machine just like the physical machine. Each of those act, work and represent a complete computer, including the processor, memory, network connections and everything else.

So, if you are testing new software on a secure platform where everything is locked, take note and consider this. In this way, you can even take a snapshot of the virtual OS so you can quickly go back to a previous state if the installed software fails to perform as expected.

Best of all, as VMware Workstation supports multi-core processors, this means that you can assign two CPU cores to your host and the remaining two to your virtual PC and you’ll find it runs very smoothly.

What do I need?

If you are wondering about what do you need for doing this, don’t worry you won’t need much to do. In fact, all you need to have is a working computer with virtualization options enabled that for Intel CPUs, it will be VT-x and for AMD it will be by default enabled. Including that, you will need the latest version of the operating system you want to install and nothing except this. Because everything’s is perfectly built and designed for you.

Does running this affect my computer or OS?

The answer is: No, it doesn’t risk, harm, damage or do any sort of hurt you have had or have knowledge about. The virtual machine is running entirely separate, and whatever you do won’t do any kind of effect to the host (physical computer machine). However, When you’re done playing with an OS, you can just delete the VM.

There are two types of VMware Workstation available that are the following.

When you have decided on a VMware version and download it, fire up the setup.

When the setup wizard appeared, go Next. 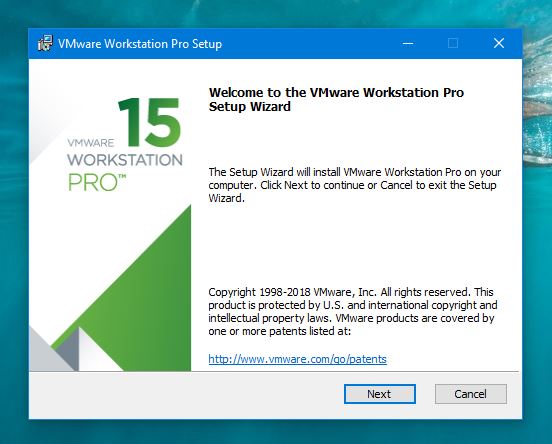 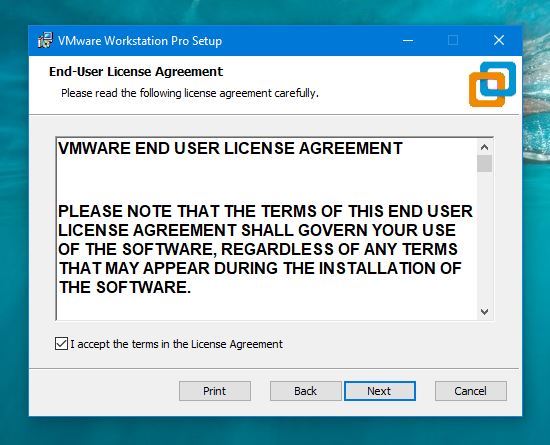 Specify where you want to install the program or let it by default, then Next. 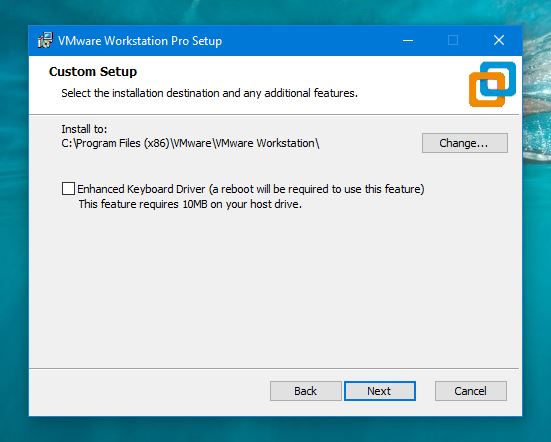 Through the process, on the user experience settings. The updates and VMware customer experience will be checked by default, let them like that if you want. 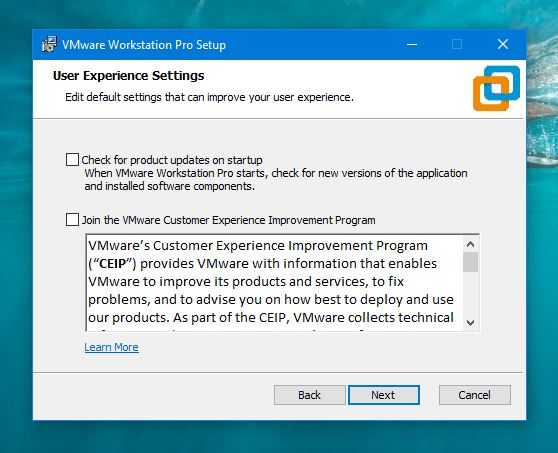 The shortcuts will be created in the places, as I it’s for me, you are free. 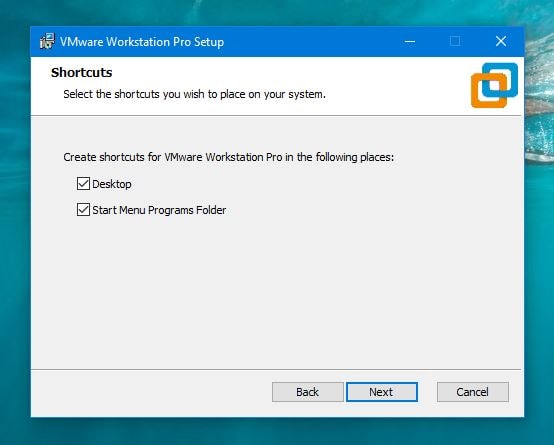 The installation will begin after you hit the Install button, simply click on it and let it do its thing. 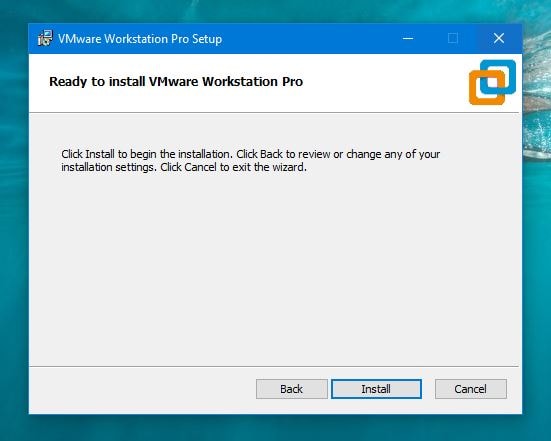 While installing, you are free to move anywhere except not to cancel or exit the window. 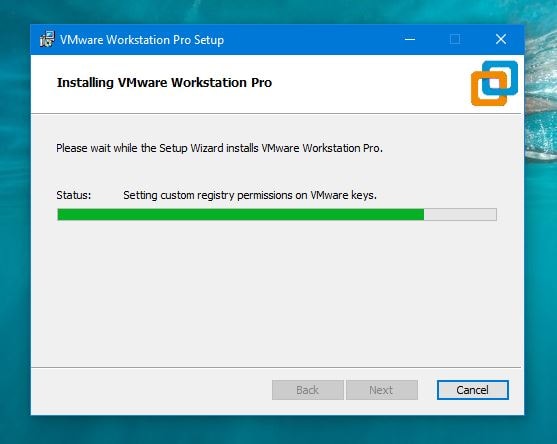 After the installation process completed, click Finish. The program is now install and ready to use. That was pretty simple, and you are ready to go. 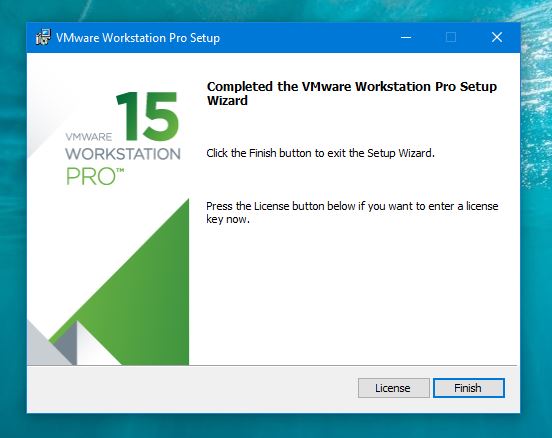 All good! There’s nothing you have left to do. Just open and start setting up a virtual machine and install macOS High Sierra or macOS Mojave. 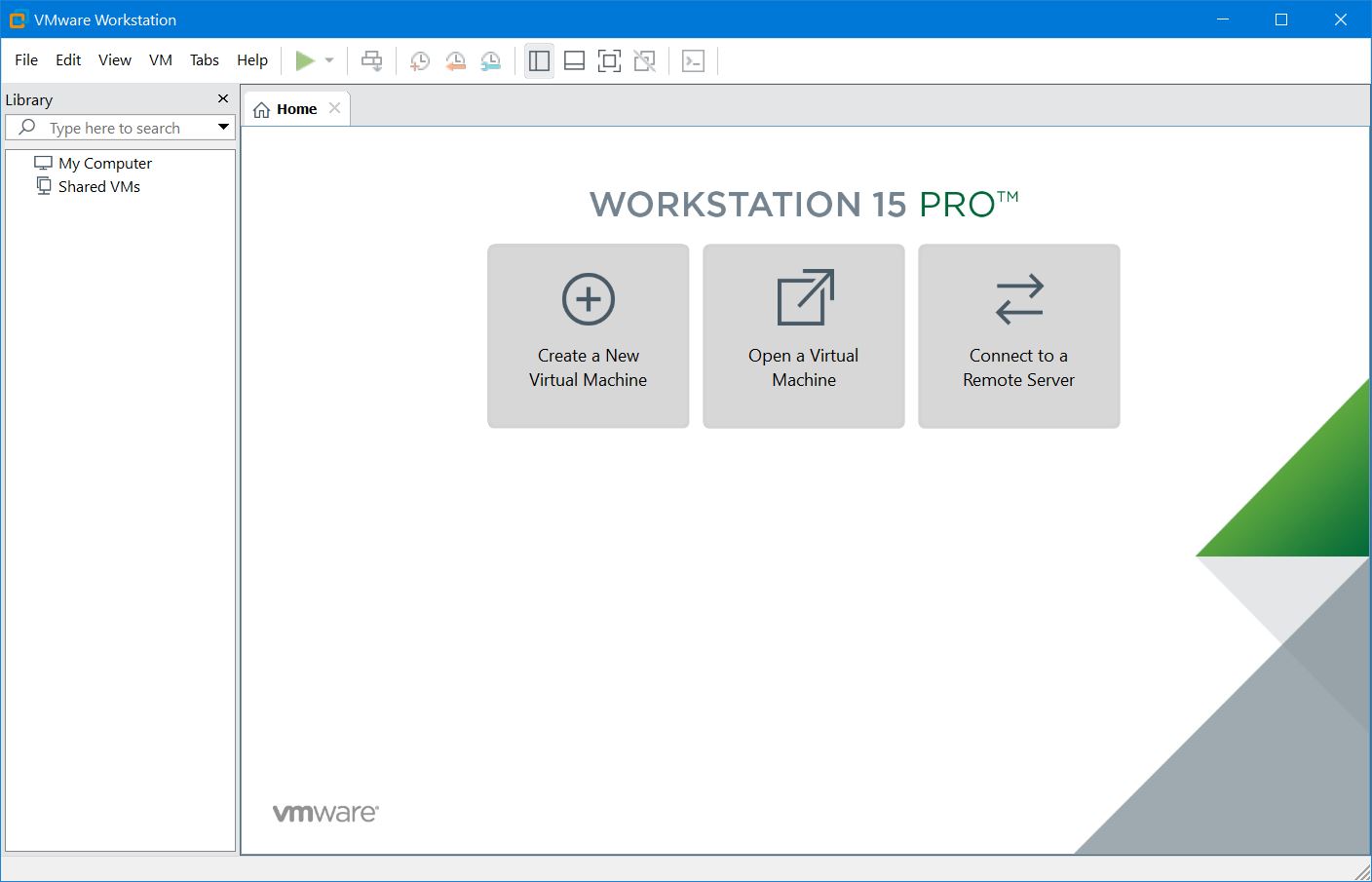 If you want to install macOS Mojave here’s how to do that. 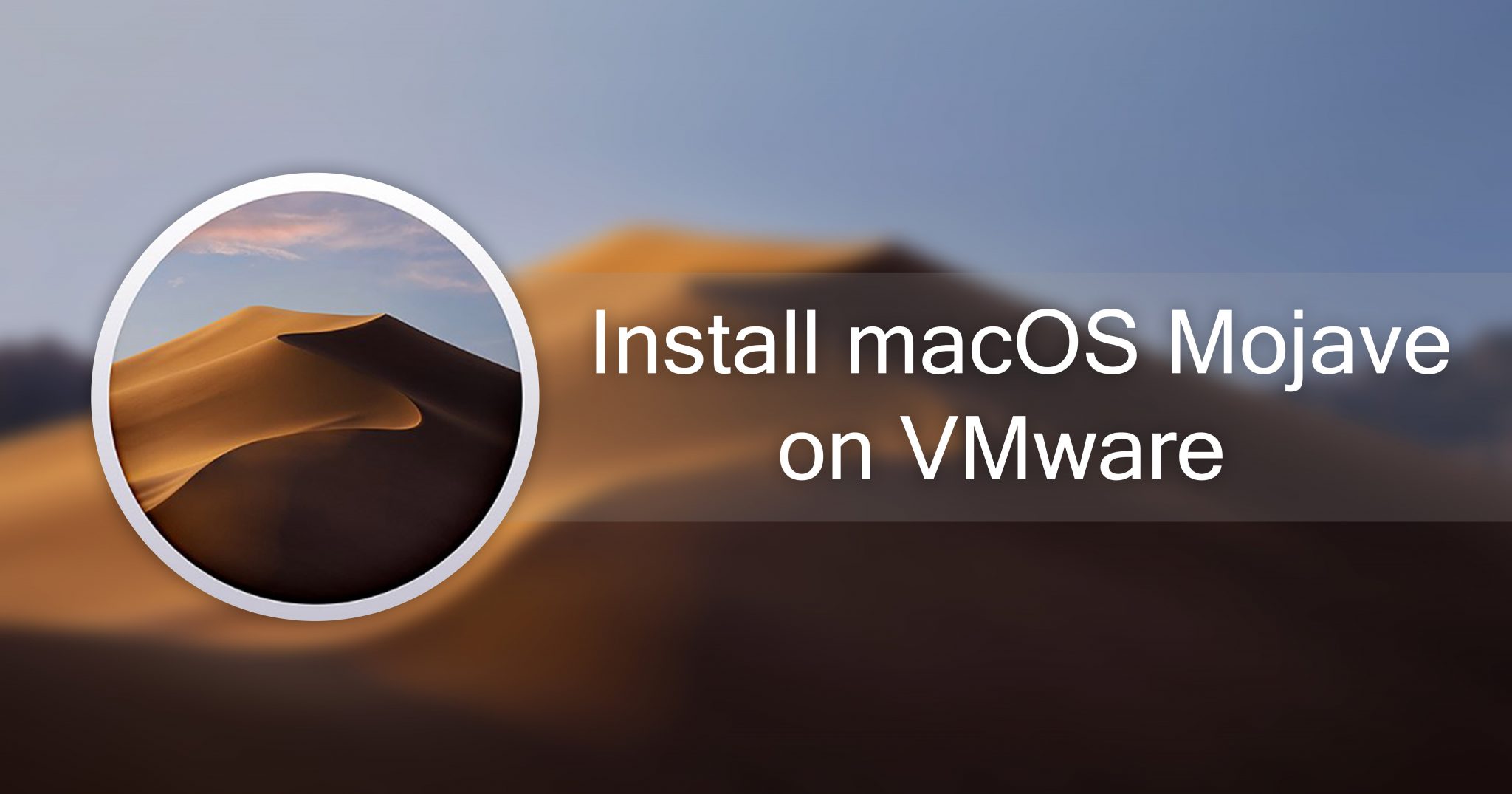